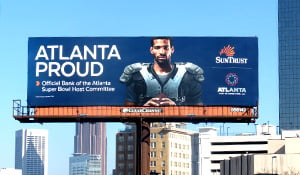 The Big Game is just weeks away and TV ad slots for the broadcast are sold out. According to the Wall Street Journal, advertisers paid up to $5.6 million for 30 seconds of airtime, which exceeds the $5.3 million spent per spot last year.

MLB Advertisers Swing for the Fences with Eye-Catching Billboards!

Although spring popped up on the calendar last week, baseball lovers know that today is the official start. Because today for the first time since 1968, every MLB team will begin the season on the same day. So as you scroll through your social feeds from the office (or from your BBQ tailgate for the lucky ones) — expect the fever to kick in!

On any NFL game day (Sunday, Monday or Thursday), you'll find football fanatics engaged in debate, touting off stats -- yards, catches and conversions, building fences with their hands and smearing war paint on each other's faces. Brands have smartly aligned their messaging with the passion and the hunger (literal stomach-growling hunger) of today's football fan. For when there's love for the game, there is also love for the gear, the sponsors, the field, the feuds and the food. The only thing fans don't like - waiting until the next game.