This Billboard Is So Awesome – Dallas made it a Landmark!

When you think of Dallas, what comes to mind?  Probably the Cowboys - the team and the real ones, Reunion Tower, JR, the Mavs and...a landmark waterfall?  That's right, Dallas is home to a landmark billboard with a 45-foot plunging man-made waterfall along I-35 on Goat Hill. The Clear Channel Dallas waterfall billboard has pumped a steady stream of cascading water since 1956, when it debuted with an ad for Pearl Beer:

The board has since displayed other big brands including Absolut and Salem, and for over two decades, MillerCoors, which has established a permanent residency: The iconic billboard boasts a colorful past as pranksters have thrown skinny dipping parties on-site, dyed the water orange and red during the Red River Showdown, and dumped loads of detergent into the cascade, creating mounds of soapsuds. And when temps dip, the waterfall is known to freeze over entirely: The landmark board has historically highlighted local and national sporting events: 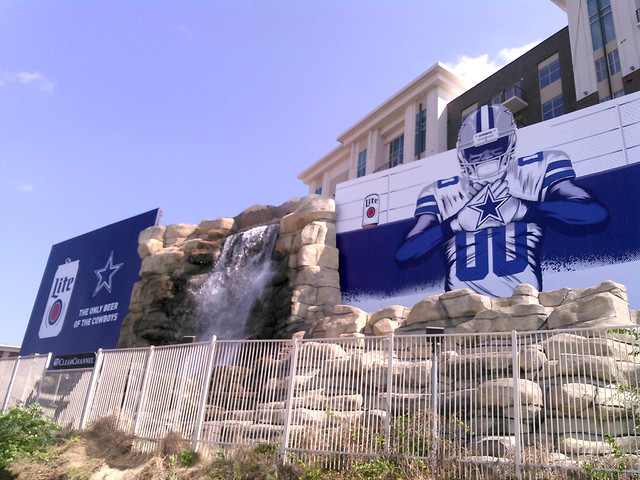 And during Mavs games or holidays, the water turns an appropriate shade for the event -- Maverick blue or a creepy red for Halloween: Due to its history and iconic status, the city of Dallas designated the board an "Extraordinarily Significant Sign" in 2008, and with the ordinance, the site underwent a much needed facelift provided by Rock-Scapes: And now, the landmark board will be a major draw for some lucky apartment dwellers as a new housing development has taken shape behind the site. Some view, huh? Make a big, bold statement with a landmark site. It worked for MillerCoors, it'll work for you!