Get Over Your SELFIE: Billboards Promote Safe Driving Habits

In 2016 alone, 3,450 people were killed from accidents attributed to texting and driving. During daylight hours, approximately 481,000 drivers are using cell phones while driving, with teens reported as the largest age group distracted at the time of fatal crashes.*

Newer cars may come equipped with hands-free dialing, but that hasn't been enough to curb this unsafe habit. That’s why Clear Channel Outdoor, Project Yellow Light, the Ad Council, National Highway Traffic Safety Administration, National Organization for Youth Safety, iHeartRadio, Mazda Motorsports, and U-Haul joined together to collaborate on a campaign that drivers can’t miss. One created by students, students who are new drivers, and students who may be in danger from other distracted drivers.

On Friday, June 8th, the hard work and vision of 11 young adults whose creative won the 7th Annual Project Yellow Light Scholarship (out of 1600 submissions!) was brought to life in Times Square. Watch the magic unfold:

Project Yellow Light is a student-driven scholarship competition that is designed to bring about social change. Project Yellow Light was created after the tragic loss of 16-year-old Hunter Garner, who died in a car crash on June 10, 2007. His mother, Julie Garner, has worked tirelessly to promote safe driving habits and anti-texting campaigns through the Project Yellow Light/Hunter Garner Scholarship. The goal of this competition is to give students the opportunity to use their voice to encourage society to put down the phone and pick up the keys to their future!

CBS2 New York news correspondent Alex Denis, hosted the event as Project Yellow Light’s ambassador to bring awareness to the dangers of texting and driving. Denis welcomed the students and awarded the participants with scholarships for their winning entries:

The powerful impact that this cause embodies was shown through the community of individuals who came out to support these students and spread their message. Congratulations to all winners who exuded talent and purpose through their designs. The winning billboard scholarships in the amount of $2,000 were awarded to high school student Alison Hendricks (Ocean City, NJ) and college team duo of Kyle Pandiscio (Franklin, MA) and Emma Townsend (Shrewsbury, MA).

Repost from @alihendricks4 — Coming to a #billboard near you... thank you @projyellowlight for an amazing experience and displaying the billboard I designed in Times Square! #senditlater #projectyellowlight 🗽🚦📱

"My design says, 'Get Over Your Selfie Send It Later.' because as a new driver to the road I've noticed that it's what everybody does, they take selfies behind the wheel or in the car. My inspiration came from wanting people to put their phone down." - Alison Hendricks 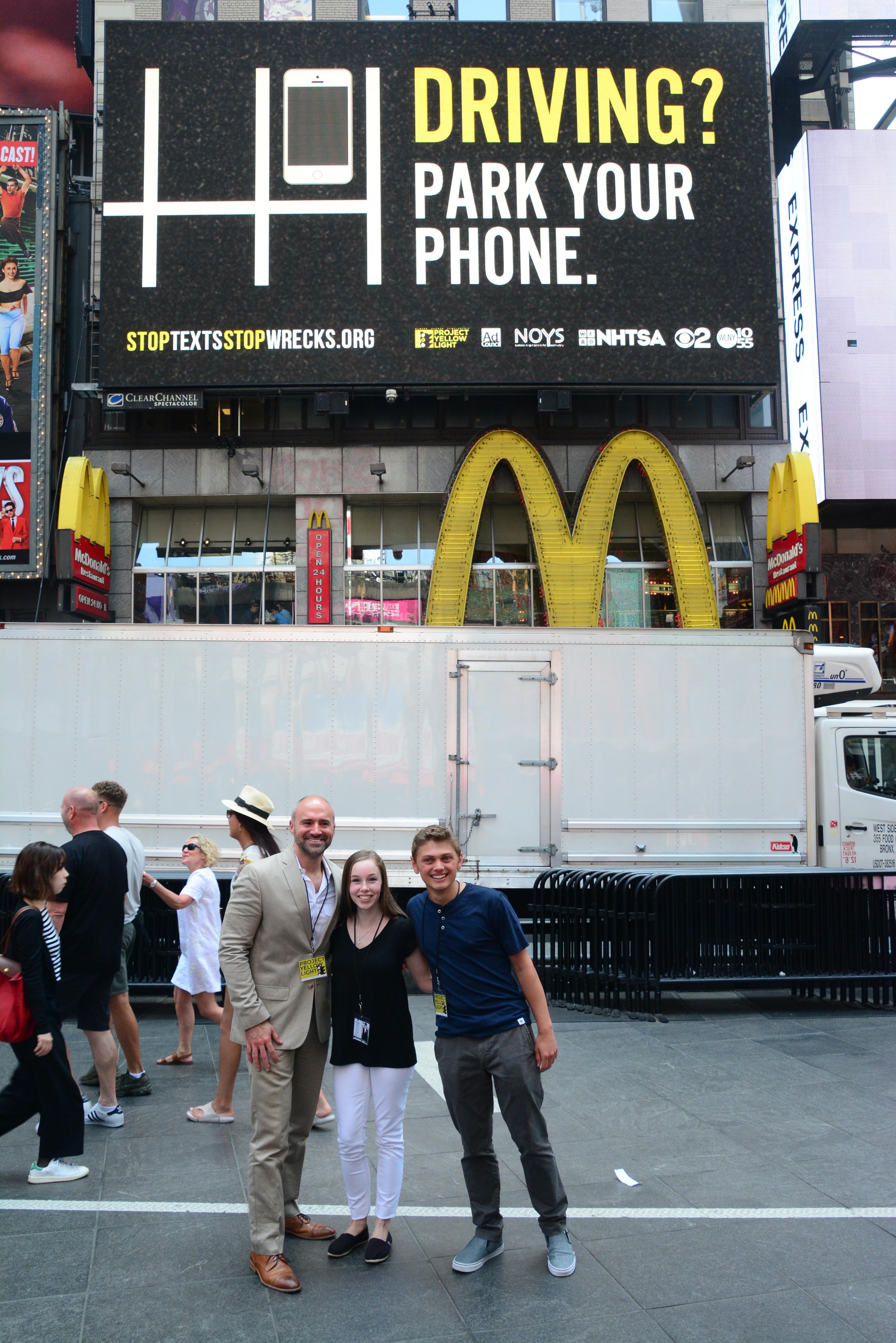 "We are very excited to promote not texting while driving because we believe it is an extremely important cause, especially for young people." - Kyle Pandiscio & Emma Townsend (pictured with Jason D. King, Clear Channel Outdoor)

See all the winning Project Yellow Light entries, including those that submitted video and radio spots.

At Clear Channel Outdoor, we are honored to be a part of such an inspiring movement to spread awareness and save lives. By using our out-of-home platform as an agent for change we can reach further and leave a lasting impact. We are incredibly proud of the students and all the Project Yellow Light partners for playing a role in preventing future tragedies, and educating peers about the dangers of using mobile devices behind the wheel. Please remember to park your phone.